We just wrapped up Day 3 in Shanghai!  It was a LONG day of touring through some of the major sight-seeing locations in downtown Shanghai, and the surrounding area.  Today's tour was organized by Insight Tour Company, recommended by CISSMUN for visiting schools to get to know the city better before or after the conference.  This was our major touring day- but we will explore on our own as group more tomorrow.

-The Pearl Tower: the most iconic architectural structure on the Shanghai skyline, this TV tower also contains the Shanghai National History Museum.
-The Bund:  Across the Huangpu River from Downtown Shanghai, the Bund is the river walk, historically influenced by the British Concession.
-The Huangpu River: named after its yellow color, the Huangpu River curves and bends diagonally through Shanghai.
-Old Town and Yu Gardens: amidst many skyscrapers, you can see the area of town built in the 1990s to commemorate and represent the architectural style of Old Shanghai.
-Zhujiajiao: an hour and a half drive away from Shanghai, Zhujiajiao Water Town is essentially a Venice-like canal community, with small, locally owned shops- specializing in very traditional Shanghainese cuisine, such as stinky tofu.

Instead of hearing from one student- we thought it would be nice to hear from each student about what stood out to them as most enjoyable/interesting.  Enjoy reading what they had to say!

Talia (Senior): I loved driving to the Pearl Tower and being there.  The drive was awesome because I got to see all the amazing buildings for the first time.  Then, I got a completely different view of it all from the top of the tower.  It was so beautiful

and the glass floor made for some awesome pictures.

TC (Senior): My favorite stop of our Wednesday tour was definitely the Pearl Tower, in the Financial District of Shanghai, right near the port where we took our River Cruise, and across the river from The Bund (the riverwalk along the British Concession of Shanghai).  Being able to go up the tower, and get a full 360 view of the city was incredible!

Brianna (Senior): My favorite part we have seen so far is Yu Garden.  The rockery was beautiful and different from what I've seen in gardens before.  It was very relaxing and had a long history which can be hard to find in the United States.

Daniel (Junior): I loved how beautiful old-town Shanghai was.  All of the old architecture was so cool to look at, and the garden was absolutely stunning to see.  It was so inte 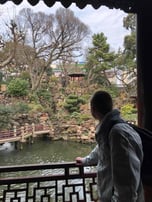 resting to see this gem of history and culture inside of a super developed and modern metropolis.

Alex (Junior): I have no problem saying that there were a countless amount of times that I was left speechless while visiting Shanghai with Jack (our tour guide).  However, nothing topped going to the water village.  It was beautiful to see the ancient roots and Chinese natives and their genuine welcome to tourists.  Seeing the beautiful temples, infrastructure, and the river was an unforgettable experience!

AJ (Junior): The authenticity of the Chinese culture is what appealed to me most on this tour day.  Zhujiajiao Town emitted many beautiful, rare, and amazing scenes seamlessly, while also intertwining Ch

inese culture through shops, food, and unknown products intrinsically.   I've loved every singly moment and place that we have encountered thus far.  This has been an amazing and enlightening experience, to say the least.

Bianca (Junior): My favorite thing about today was walking

about Zhujiajiao, commonly referred to as the Water Town.  We rode the bus to the town which was about an hour and a half away, and as soon as we got there, we took a fast boat ride to the other side of the town whi
ch was filled with a bunc of little outdoor shops.  I personally loved going around and looking at each of the shops and what they each sold.

Bella (Junior): My favorite part of the day was seeing the Fangsheng Bridge in Zhujiajiao Water Town.  Our tour guide explained that it was built by a monk and many used the bridge to buy fish from the markets and then set them free.  Because of this, the bridge has since come to be called the "Setting-fish-free Bridge" and symbolizes the freeing of all living things.

Avery (Freshman): My favorite part of the tour was going to the Yu Gardens.  I found the history of the actual place to be really intriguing with the fact that one man built a garden for his dying father, but his father was never able to see it actually finished.  From what our tour guide told us, part of the English translation for Yu is pleased are parents, as the builder wanted to do something to honor his parents.  I thought that this stop was quite beautiful and one of the only non-modernized ancient sites left in Old Town.