Friday began with an early start in Berlin. We hit the ground running after our long journey. Our Tour Manager Abbie met us at our gate and we immediately started out on our first tour of Berlin. We had several hours before check-in, so we stored our luggage and set off. Abbie took us on a quick walking tour, showing us Nikolaikirche, the oldest church in Berlin, taking a quick walk through Museum Island, the former royal sector of Berlin, and giving us a glance at the Berliner Dom, a Lutheran cathedral from the early 20th century. The walking tour culminated in a lunch stop at an indoor shopping mall, allowing the students to taste some local cuisine at their leisure. While some tested the differences between American and German Tex-Mex and McDonalds, others were a bit more adventurous, taking the opportunity to try currywurst for the first time. 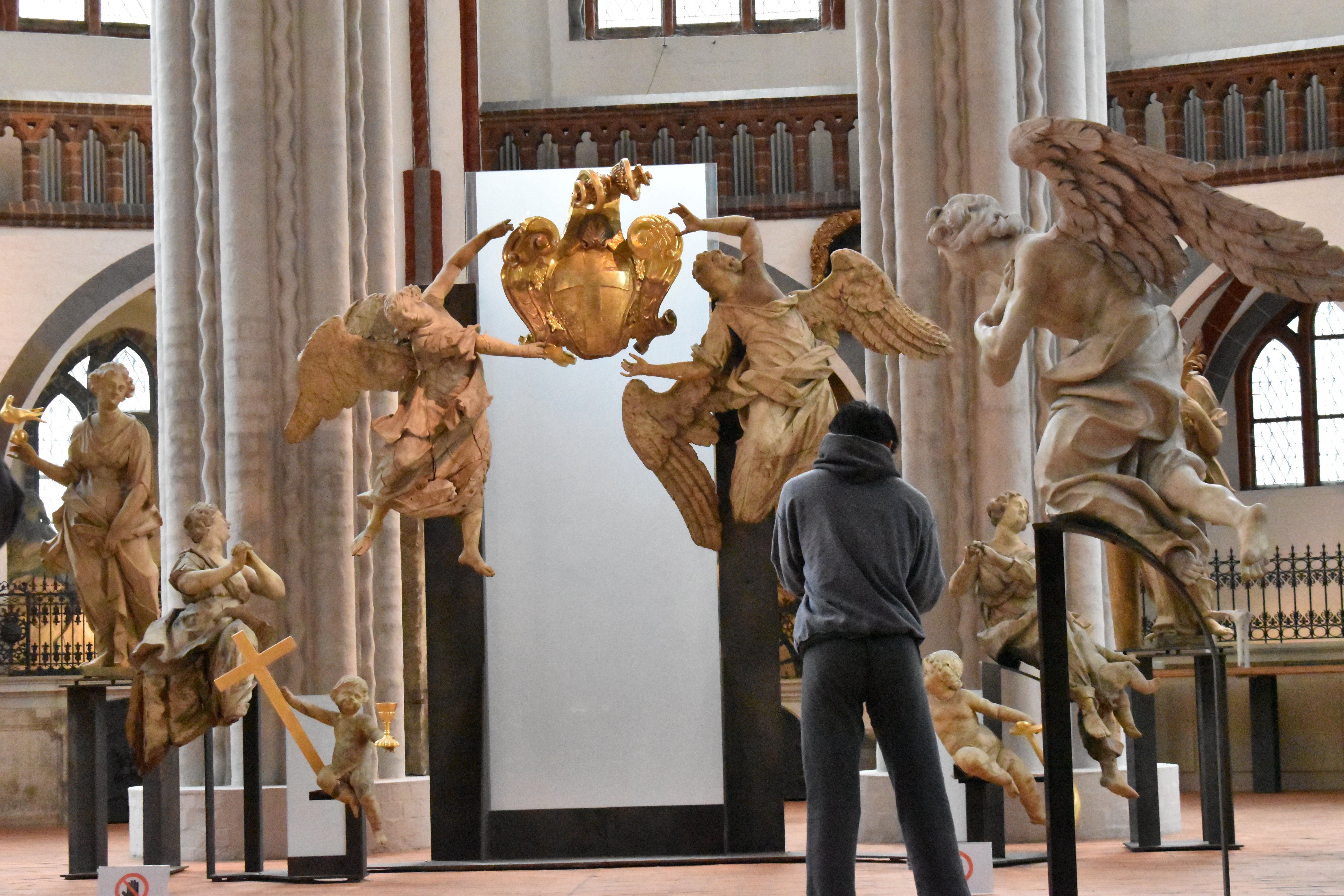 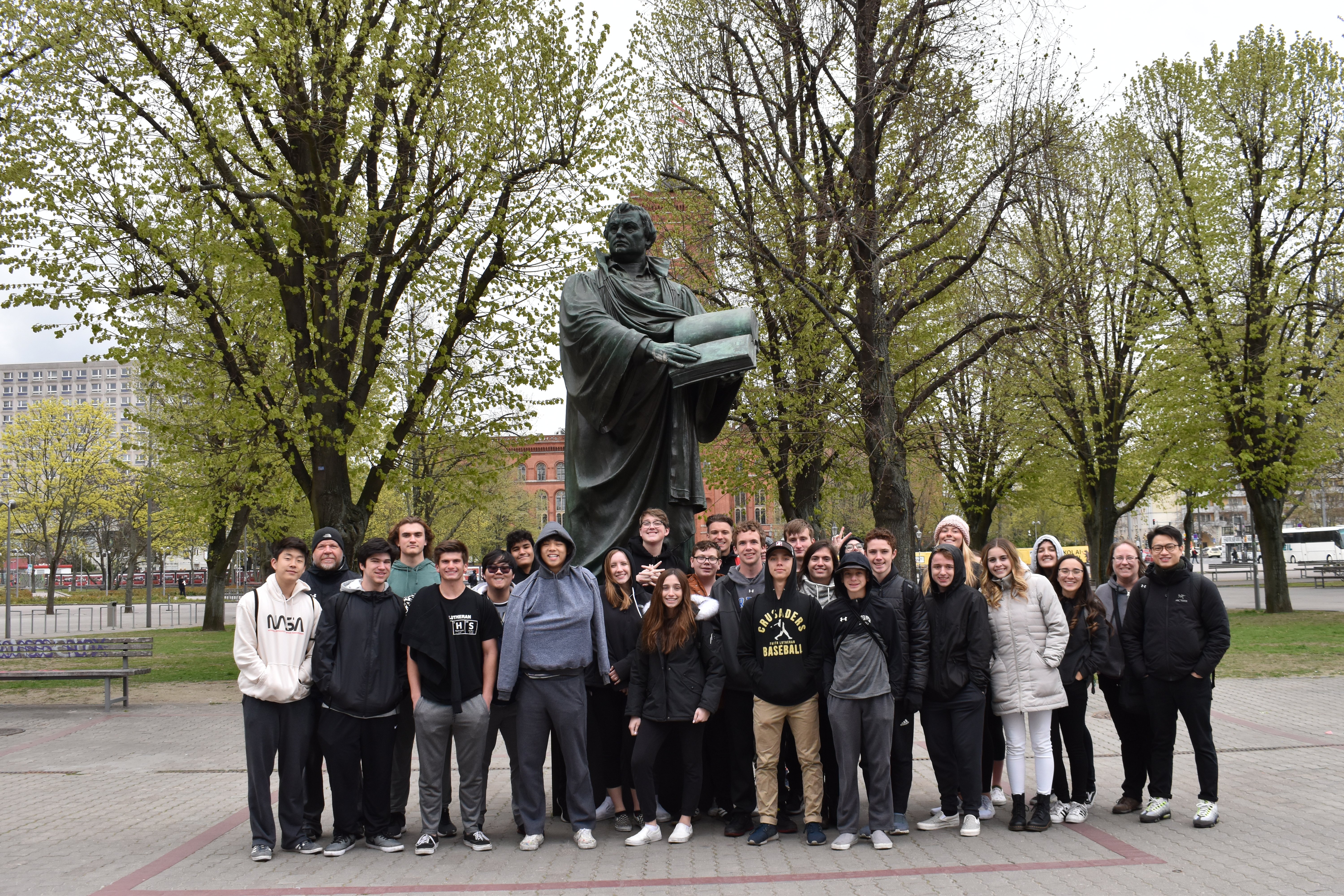 After lunch we returned to our hotel for a rest before heading to a local pub to try some local cuisine. Those who missed out on currywurst in the afternoon had a chance to try it then, along with a few other of the hundreds of different types of sausages Germany has to offer. By this point, while spirits were still high, everyone was dragging, and it was definitely time for bed so that we could get our early start the next morning.

The group got up early the next morning, enjoyed breakfast at the hotel and met our tour guide John. We started out at a part of what remains of the Berlin Wall, and we learned about the significance of the Wall, what it really meant while it was up, and what it really meant when it was torn down. While there, we had the opportunity to touch the wall ourselves, and we got a better idea of why anyone would risk their lives to try and cross it. The last person to lose their life in No Man’s Land, the space between East and West Berlin, was six months before the wall was finally torn down in 1989. 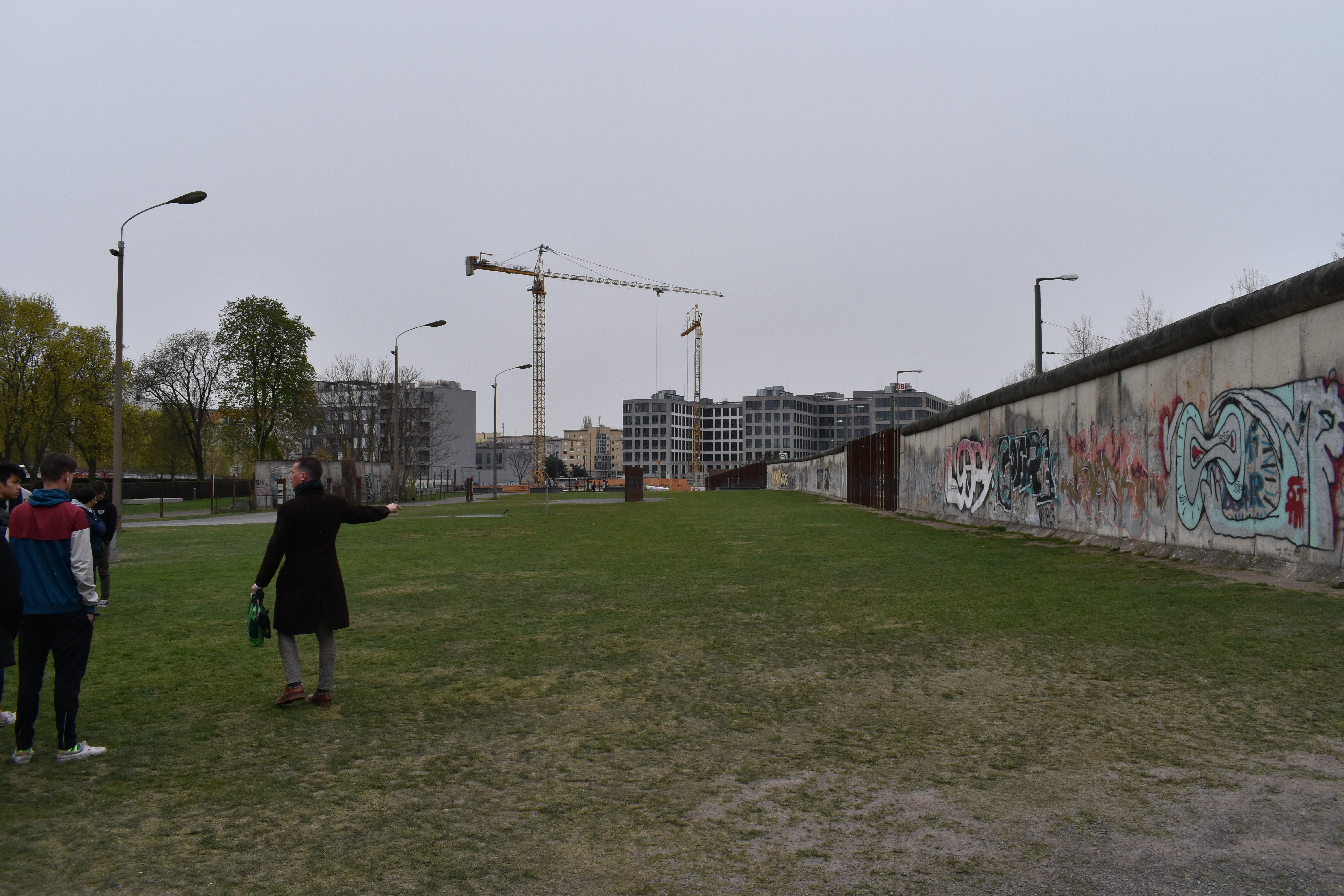 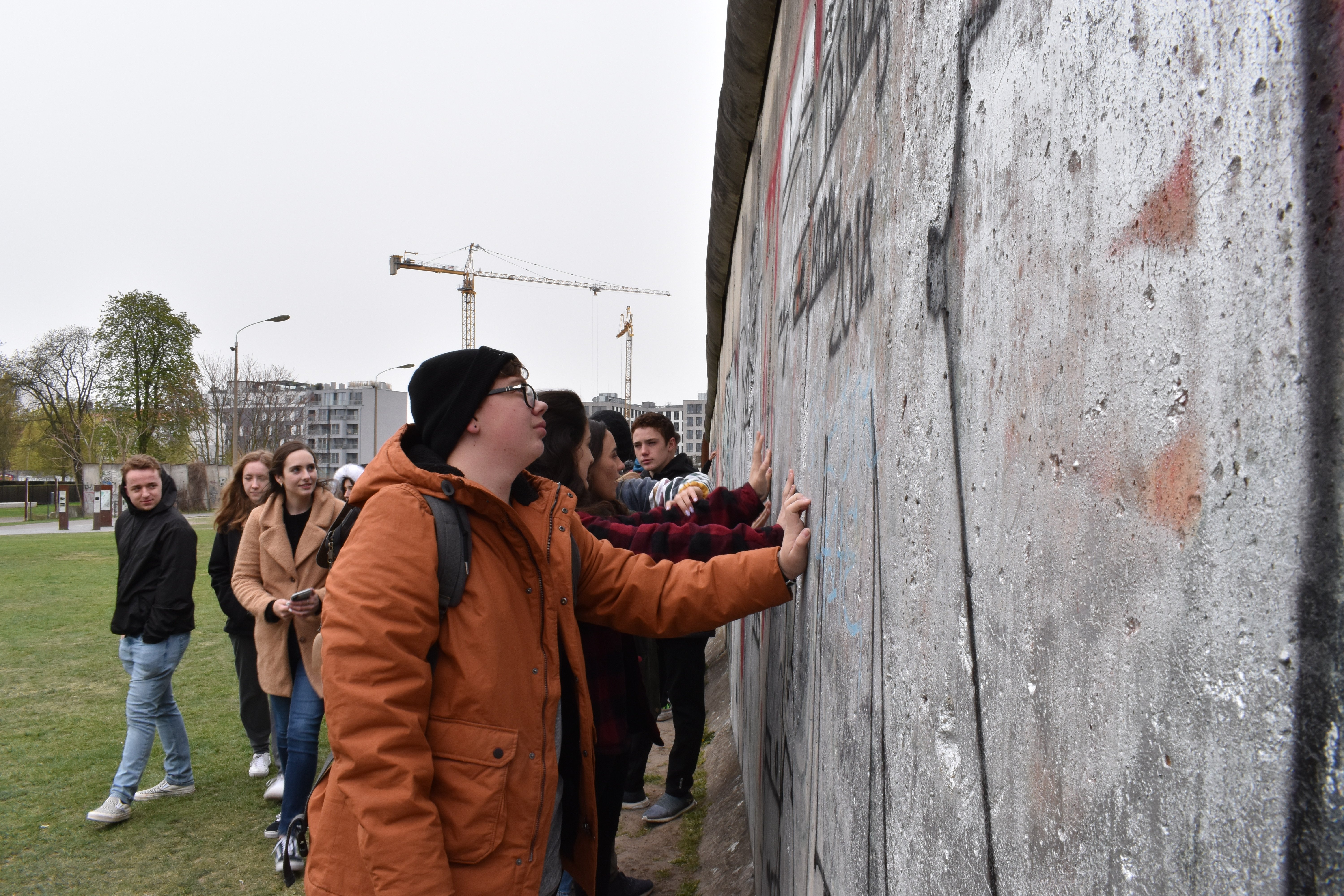 From there we visited the Holocaust Memorial. Set in an entire city block, and made up of 2,711 unique concrete blocks of varying shapes and sizes, the real meaning of the memorial is subject to several interpretations. After walking through once, we had the opportunity to talk about how we felt, what we thought and observed, and our own interpretations of it. 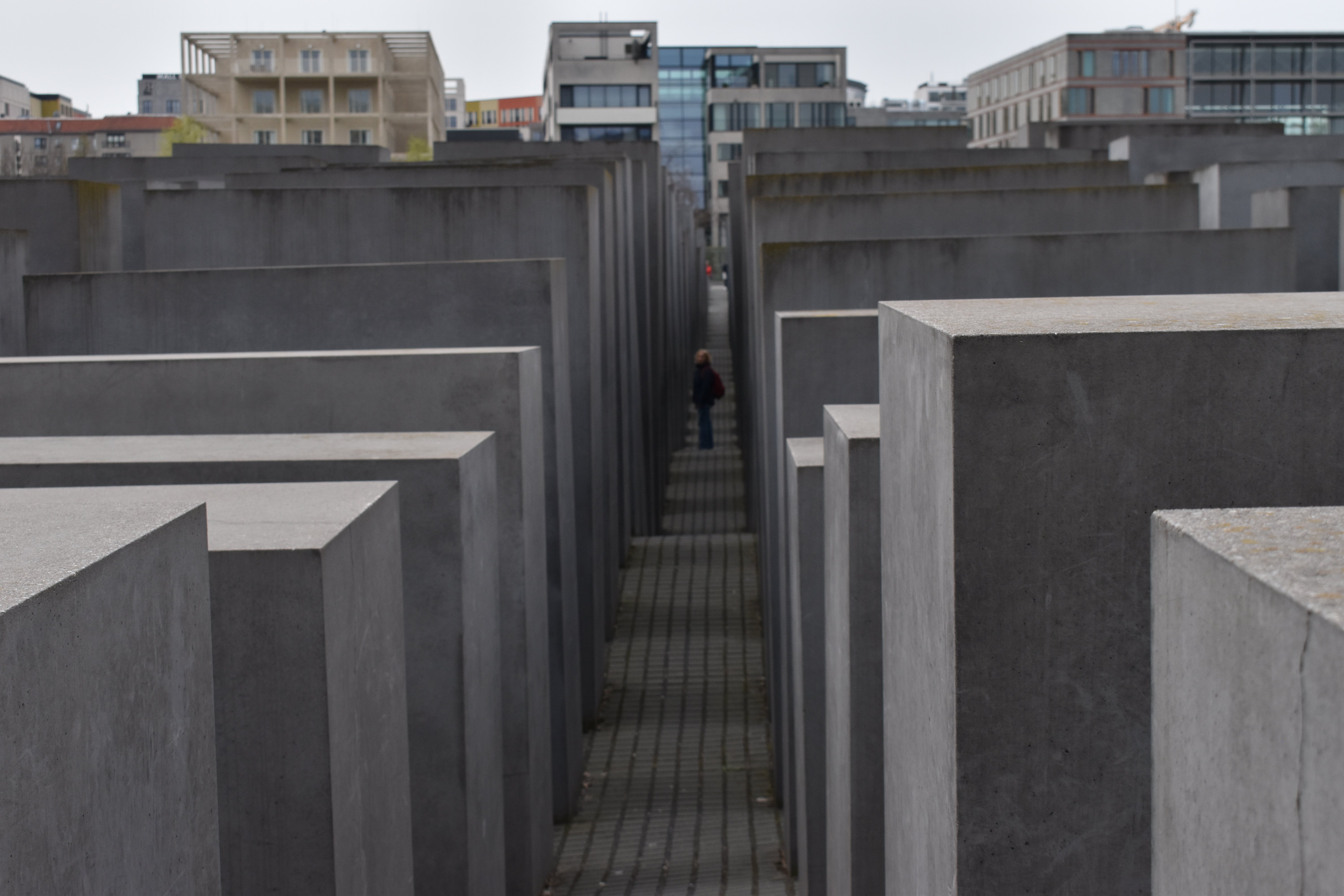 Next we stopped at Bebelplatz. Located across from Humboldt University, and surrounded by educational buildings, including a library, this square was home to the largest and most famous of the Nazi book burnings. The neighboring library was  pillaged of any and all titles and authors considered divergent, anti-German, or not German enough, and the books were brought into the square and set on fire. Thousands of books were burned. Today there are two unobtrusive memorials. One is plaque with a quote by Heinrich Heine from the 19th century “Wherever they burn books they will also, in the end, burn human beings.” The other memorial is a glass “window” in the ground that looks into an empty library. 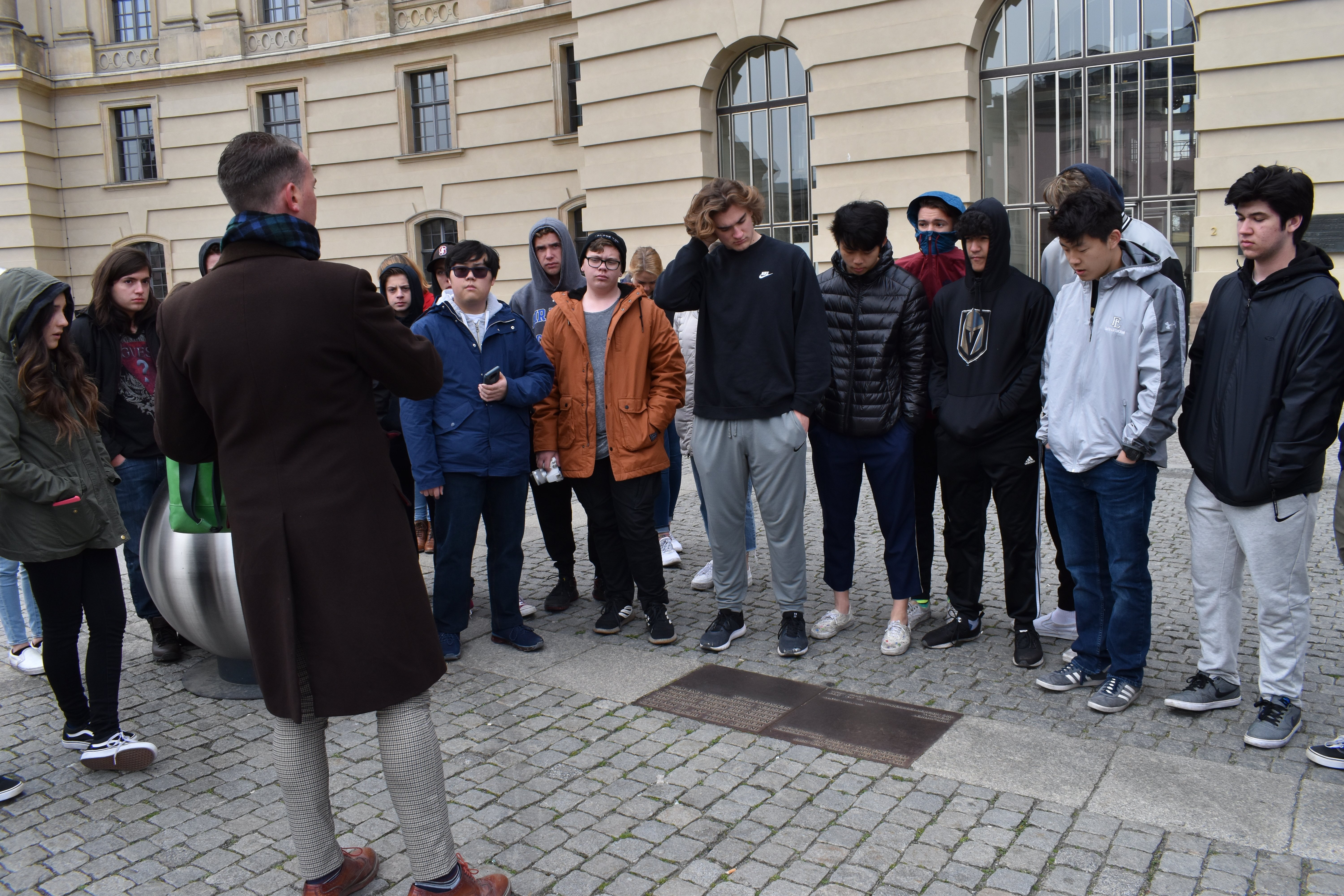 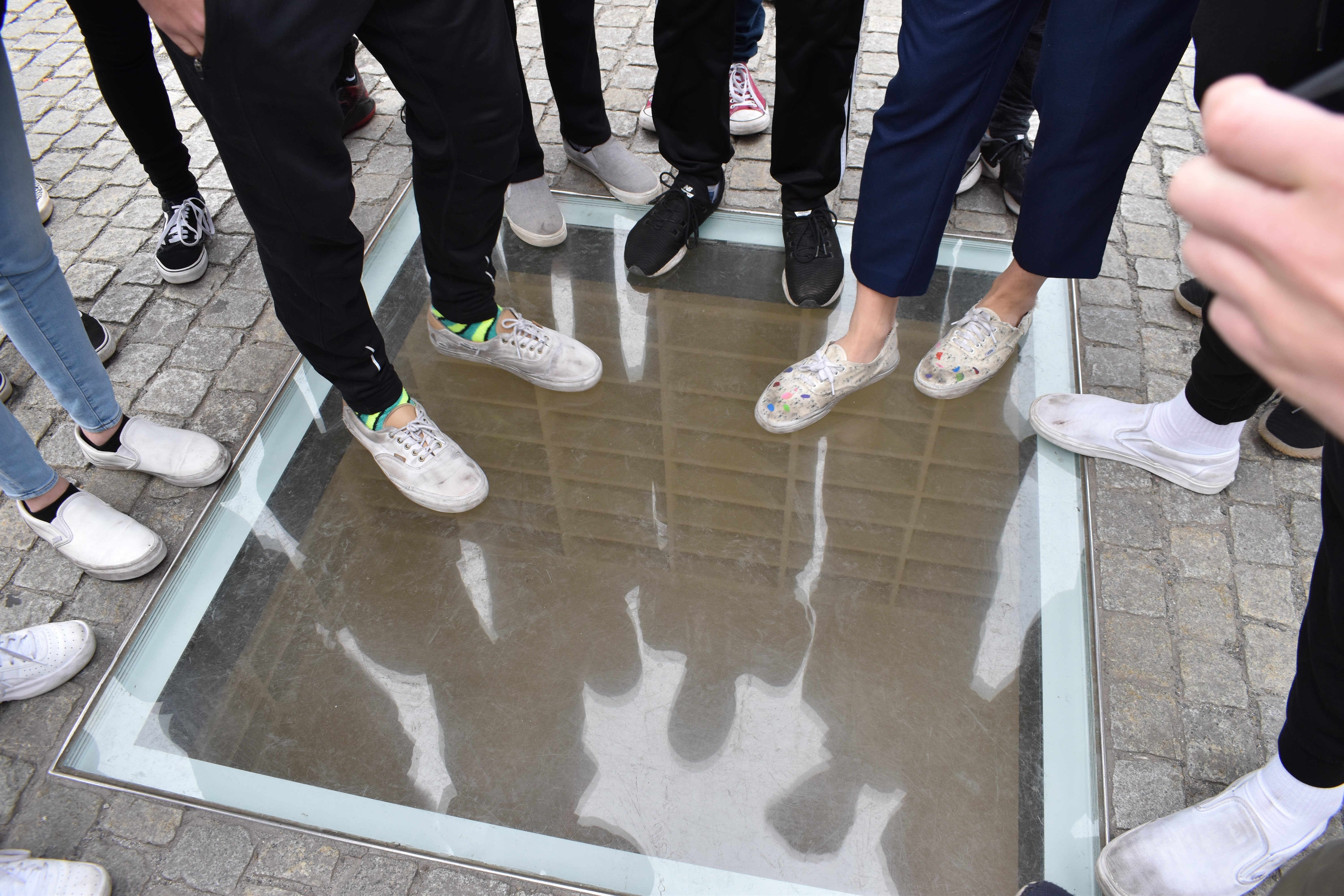 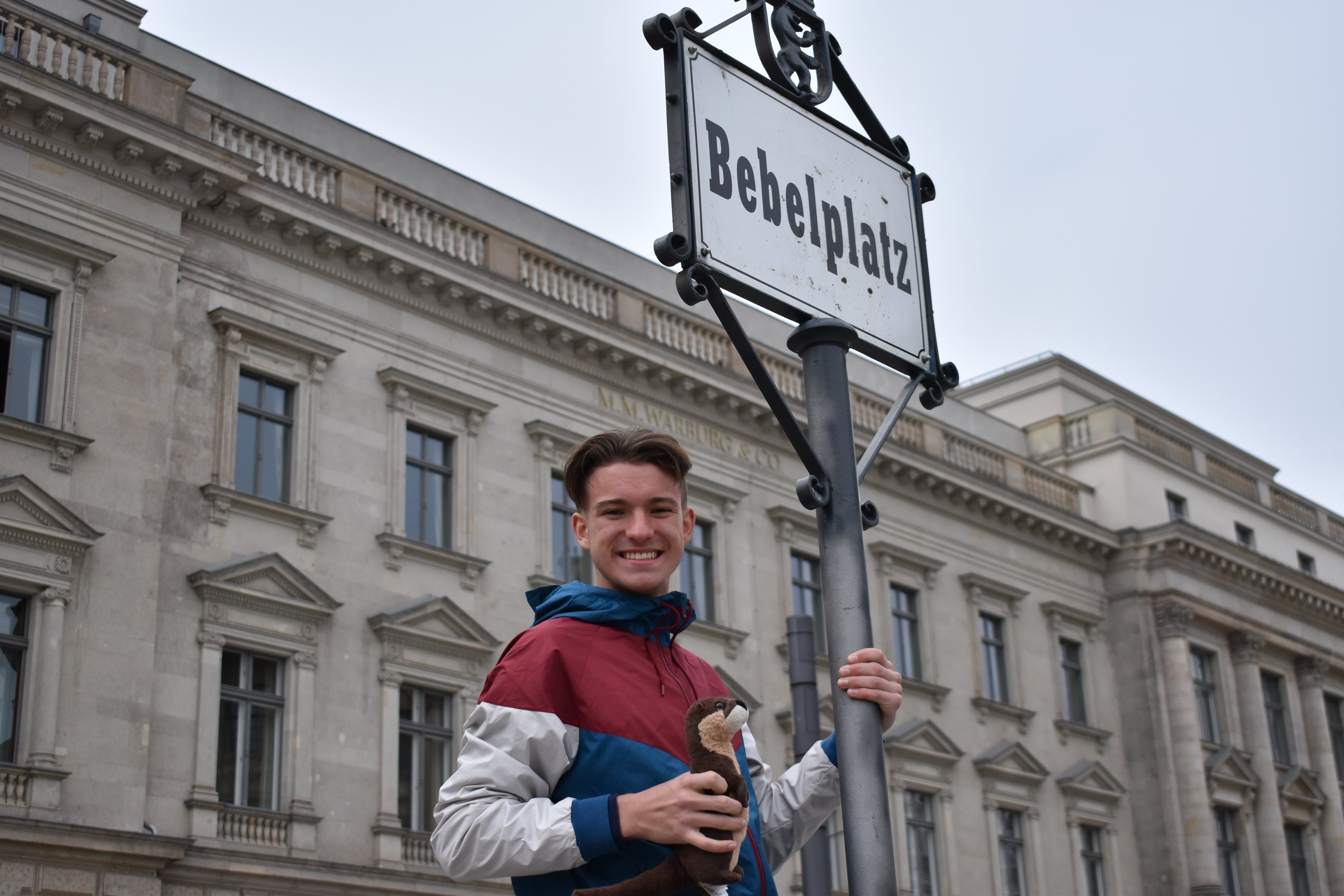 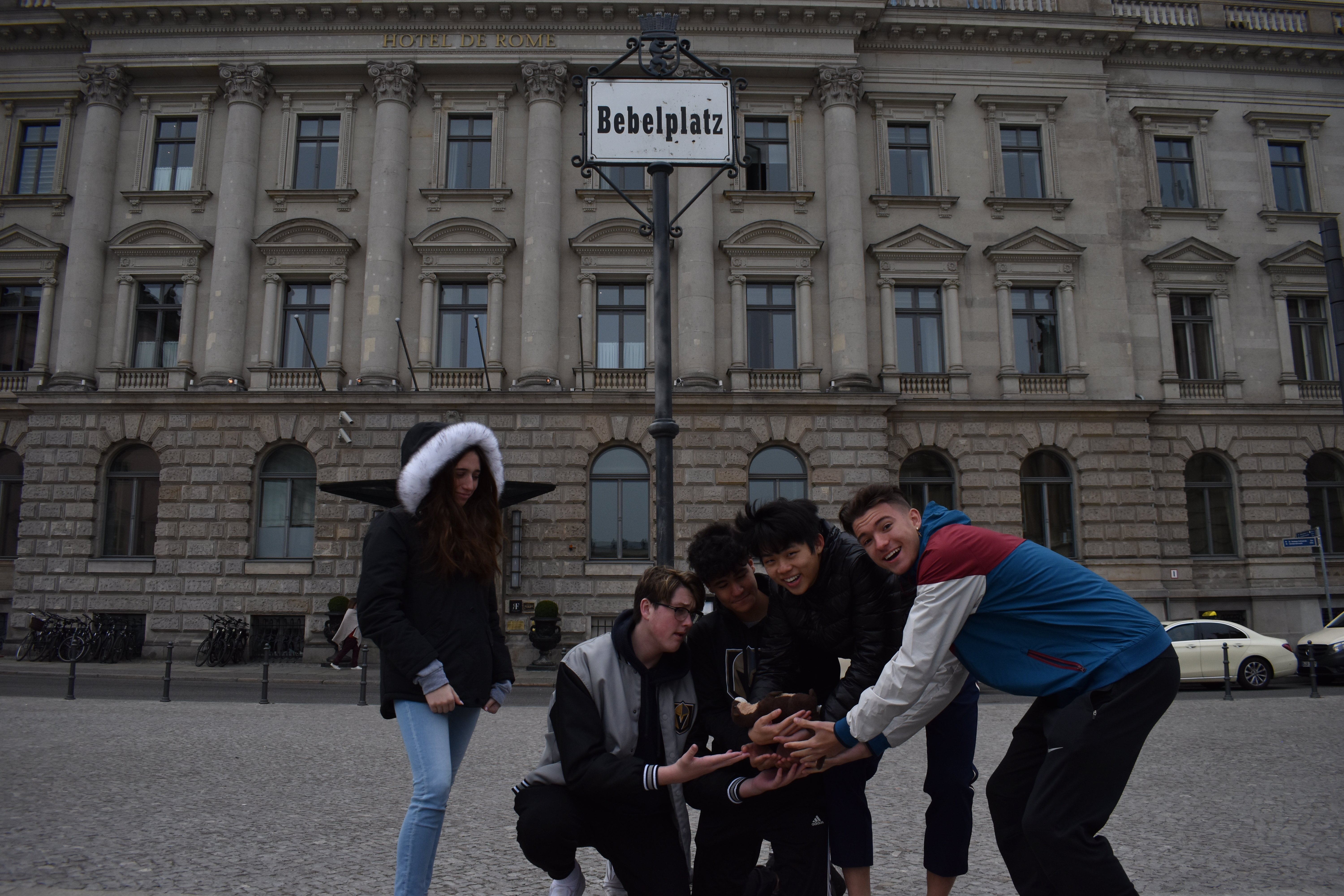 We ventured back through Royal Sector, learning more about the reigning families from before World War I. So much of Berlin was lost to the bombing of World War II, that very little architecture or buildings exist from before that time period, at least very few exist without needing to be rebuilt. The royal palace survived, however, and could have been salvaged but, after World War II, East German government decided that the palace did not fit into the new German culture, and they demolished it. Now Berlin has spent more than a billion euro reconstructing the palace to scale. It opens in the summer of 2019.

Finally, we finished our tour at the Brandenburg Gate, and got to hear some history that predates the 20thcentury. Atop the Brandenburg Gate sits the Quadriga, depicting the goddess of victory. It overlooks a large square and the beginning of one of the main thoroughfares in Berlin. At one point, Napoleon had stolen the statue, and it remained lost to the Germans until  1814 when it was restored to its proper place. Coincidentally, and unrelated, this is the same square that Michael Jackson hung a baby over the railing of his hotel room. There’s a lot of history here. 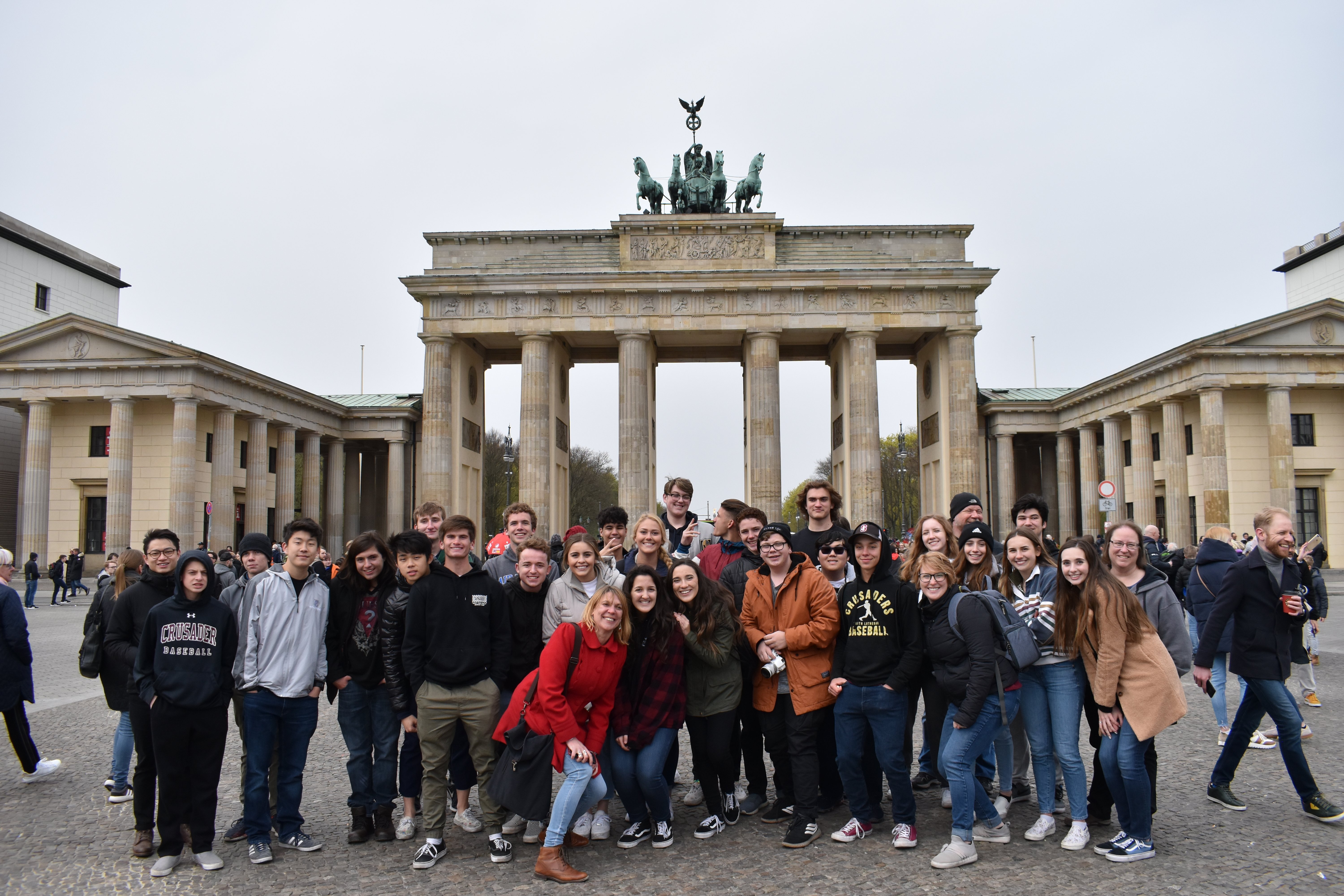 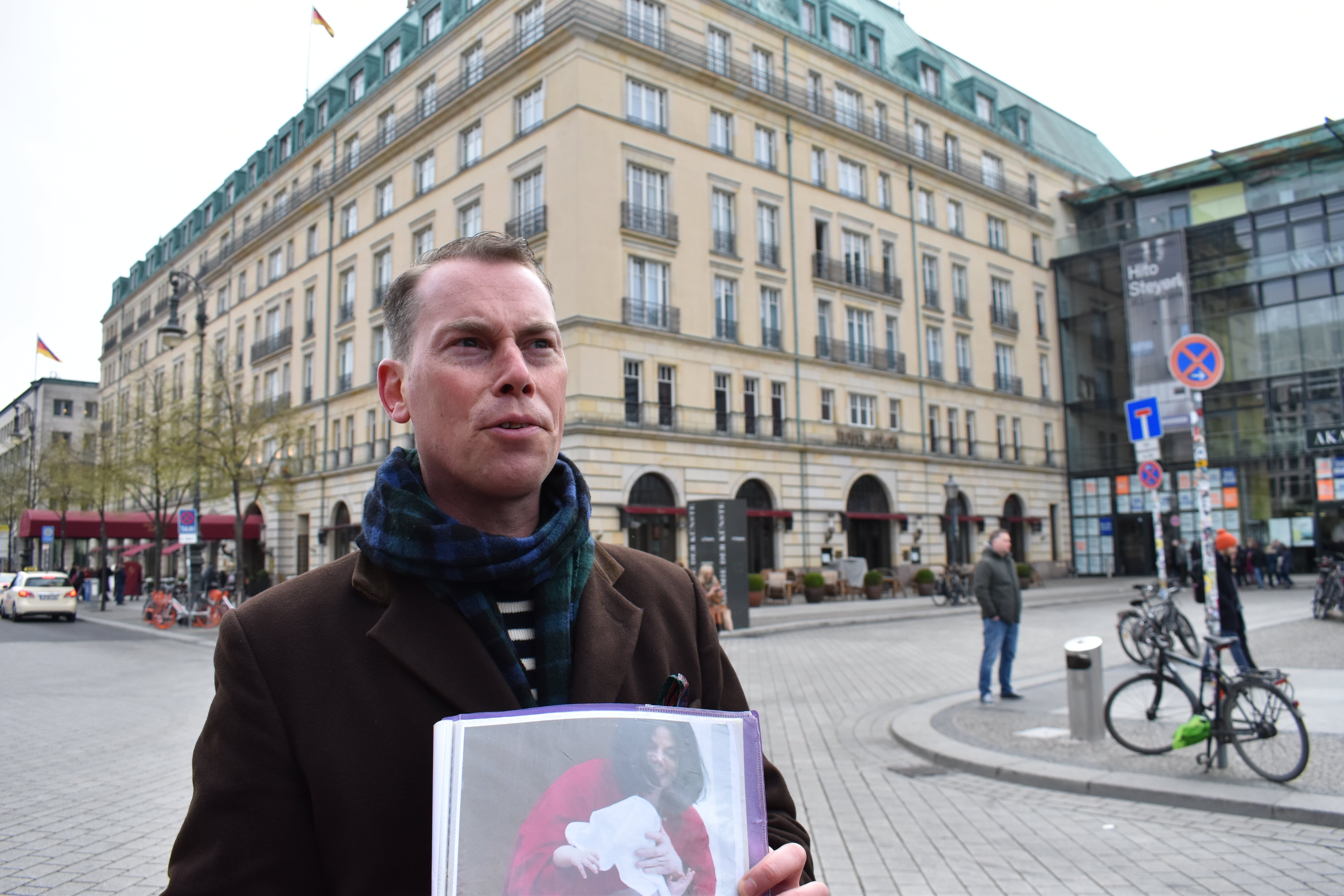 After a break for lunch (Döner for the adults- highly recommended), our afternoon consisted of stopping at the Ampelmann store and Humboldt University Bookstore, before heading to the arts district. Today, we had the opportunity of traveling via three of the five different public transportation systems in Berlin. We all got good at hopping on and off. When we arrived at our destination, we took off on a guided tour of graffiti and street art. We learned the difference between the two, and saw examples of both. It was interesting to note that when when we see tags in the United States, we think of specific gangs and territories, but in Berlin the “gangs” are not violent, instead they exist only as graffiti gangs- identified by their tags, but with the dangerous connotations in the U.S. After our tour, we all had the opportunity to create our own street art. Everyone took it very seriously, and enjoyed the process. The men at the warehouse who led our street art experience, were terribly encouraging to the whole group. According to Dylan Boyle and Chase Zavsza, “The street art was the coolest part.” 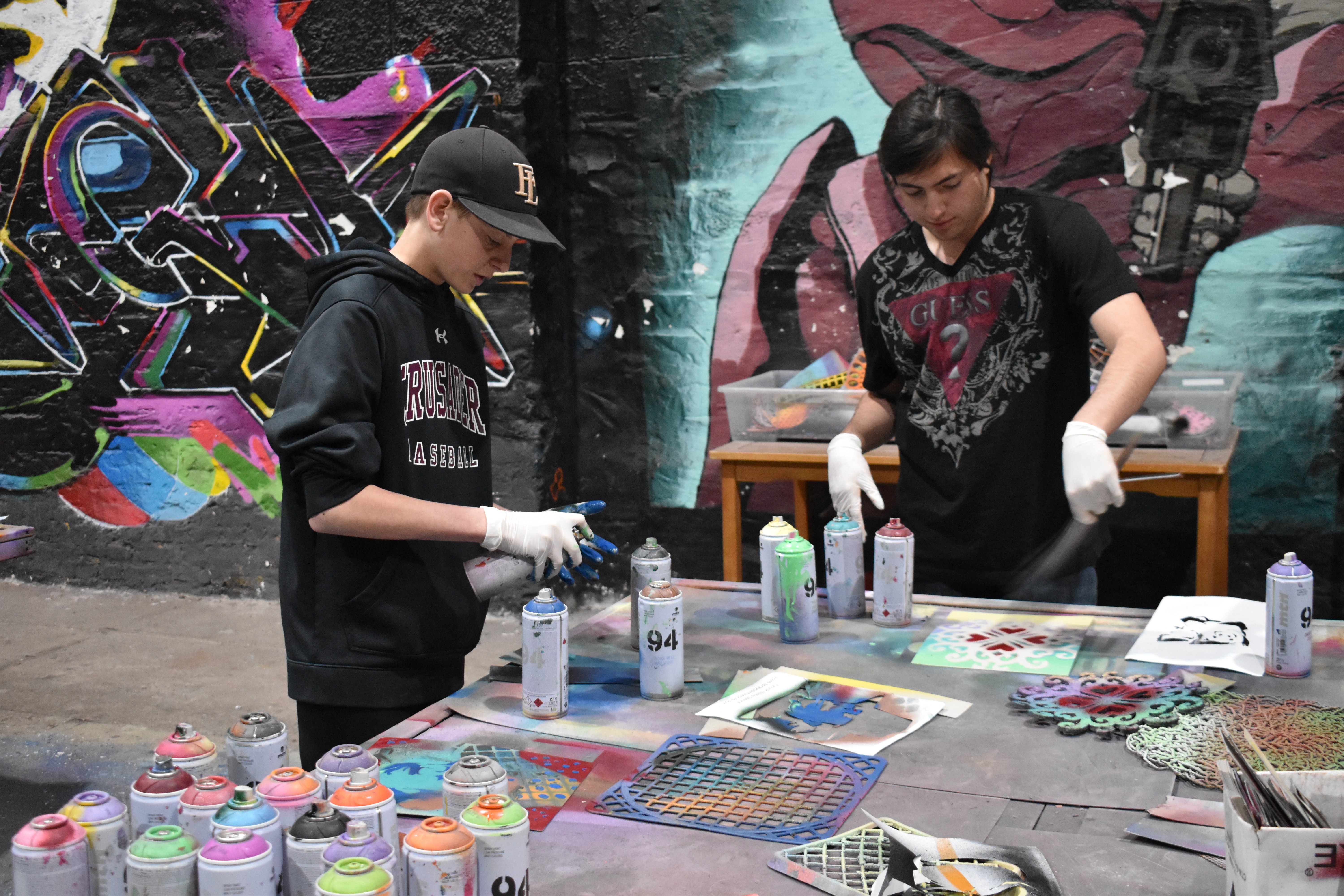 Sunday morning we said goodbye to Berlin. After our art lessons, we got a good night’s sleep and a leisurely start. We met the bus driver that will be with us for the remainder of the trip, and spent a couple hours walking the East Side Gallery a mile long stretch of the Berlin Wall, painted and decorated by various artists, and touring the German History Museum. And with that we are on our way to the next stop! Onwards to Dresden!