Faith Lutheran graduate Mark Wilbourne experienced a traumatic spinal cord injury in January of 2019.  He joined his fellow classmates four months later to speak at the Baccalaureate ceremony.  This is the video footage and the transcript of his speech.  Mark graduated with Honors and received endorsements from the STEM Academy and the Conservatory of the Fine Arts program.  He ranked 9th in his class and will continue his academic pursuits by majoring in Aerospace Engineering at University of Colorado, Boulder.
Excerpt from the Top 25 magazine:

Mark writes, "After my accident, I realized you don't know the plan God has for you.  And that's fine, because you are going to find out eventually so there's no need to be mad at God for what you don't know.  You need to keep living and honoring Him as you find out." My time at Craig hospital brought a lot of stories.  Lots of different people, lots of different injuries, and lots of unique experiences.  These stories really helped me the most throughout my injury, as they gave me hope for the future.  However a couple people really stood out to me.

One of the first people I spoke to was named Tucker.  Like me, he used to be on a ventilator, couldn’t eat or talk for a while, and had vocal cord issues. Leading to weak speech and a poor swallow. When I met him I still couldn’t eat or talk, and my parents were telling him how I just weaned off the ventilator and was finally able to breathe on my own.  Part way through the conversation his face changed from happy and healthy to taken aback, and he started to cry. He said, “I forgot about not eating or talking or breathing, I remember how hard it all was, and the 3 month nightmare it was with the constant struggles.”  We were all taken aback for a moment until we realized, he is not there anymore.

Tucker was one of the happiest people I have ever met in my life.  He would stop us everywhere we saw him, constantly try and help us out, and on his last day he came into our room with a basket of chips, not for me, but he was looking for more for his trip home.  Tucker was one of the first people where I could see someone go from my condition to someone so normal and happy.  I didn’t really care what everything would look like from where I was, because I knew everything would be ok.  I had no clue how, but one day I would be like Tucker.

Another person was named Will.  He was my neighbor at Craig and had far less function than I did.  He only had one working arm, but it was too weak to do anything practical.  This made him fully dependent on others for everything including eating and dressing.  Will was a missionary however, and had a great sense of humor. He told me one night that his favorite Bible verse after the injury was Psalm 46:10 saying, “Be still and know that I am God.”  He liked this verse because he said being paralyzed really helps with the ‘be still’ part.  He also told me one night that he knew he had some big plans out there for him.  Obviously, he had a pretty good testimony now for his mission work, and that there was a purpose out there for him.  There was no telling what it was, or when he would find out, but he had confidence that something good would come out of all of this.

There was another person my age on my floor named Nash.  He too was 18, and many staff persons said we were much alike.  However sometimes I thought he was much stronger than I was. Nash suffered from constant nausea, joking how he got his dry heaves out for the morning.  For a long time no one knew why, and put it off as just part of the injury which is common to have some nausea from a traumatic injury.  However the entire time he was there he had a staph infection in the hardware they put on his spine, making him re-do his surgery and start recovering from it all over again.  When I found this out I was more impressed with him than everything else.  Anyone who’s had an infection of any type can tell you how terrible they are and how much they wreck your body, yet Nash always made it to therapy.  He always welcomed me to visit his room and eat with him, no matter how he felt.  The day before I left Craig I went and saw him one more time to say goodbye.  He had just returned from his hardware replacement surgery and I saw him rolling down the hall.  He had tubes coming from everywhere out of him but he also had the biggest smile on his face.  I could tell he was in so much pain, but it didn’t stop him from pausing from his busy day to talk to me and say goodbye. 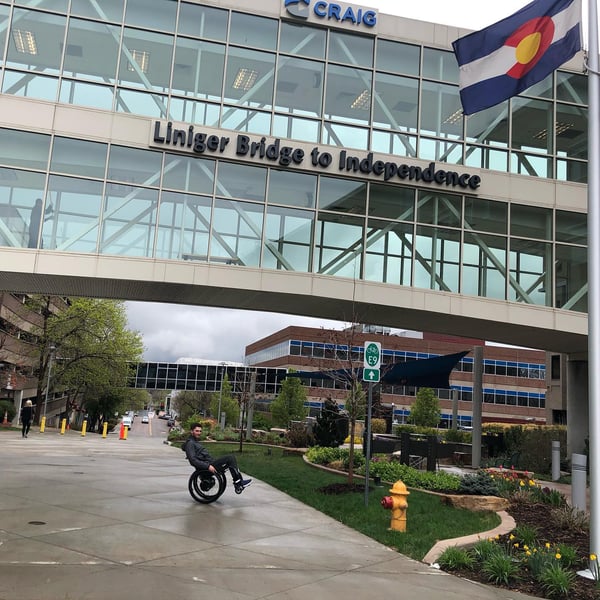 Mark Wilbourne towards the end of his rehabilitation at Craig Hospital in Colorado.

All of these stories reminded me of the story of Job, one of my favorite Bible stories.  I was not inspired by the part of how Job went through many struggles or when God tested him and still kept the faith, but rather the end of the story...The part where Job cries out to God and says Why are you doing this? Make the suffering end there is no point to this. God does not respond with, “because it makes you better or stronger” or “I’m testing you”, but He shows Job the entire world.  He says where were you when I made all of this, can you tell that mountain to move? Did you make yourself? Are you in charge of the universe? Essentially, God shows Job how little he knows. There is no point in questioning the one who made you.  There was a plan and a purpose for Job, but he didn’t have to know it.  It was up to God.

A lot of times in life you’ll feel like Tucker, Will, Nash, and Job.  Feeling hopeless with a tragedy in front of you and uncertainty all throughout.  You’ll feel sad, angry, worn out, stressed, and all around confused onto what is happening or what will happen.  But take Tucker as an example, everything will work itself out, just be patient. Take Will as an example, there is a purpose out there for you, just don’t stress about it.  Take Nash as an example, keep smiling and think of others no matter what.  Finally, take Job as an example, everything is up to God.  Tragedy will come, and it is perfectly ok to feel bad and hurt through it all, but it's not ok to lose hope.  There is an end and a purpose to it all, and sometimes you just have to be still, and know that He is God.

Mark Wilbourne '19 graduated with Honors and received endorsements from the STEM Academy and the Conservatory of the Fine Arts program.  He ranked 9th in his class and will continue his academic pursuits by majoring in Aerospace Engineering at University of Colorado, Boulder.