Conquering Death to Give us Life

Woody Allen once said, “I'm not afraid of death, I just don’t want to be there when it happens.”  That’s cute and funny, but the reality is… he was afraid of death and it is going to happen – to all of us.  I don’t know about you, but that scares me a bit.  For the huge majority of the people in the world, even us Christians, death can seem scary.  But as Jesus walked the face of the earth, death didn’t scare Him.

First He brought a widow’s son back to life in Luke 7.  Then he did the same for Jairus’ daughter in Luke 8.  And later, and perhaps most dramatically in John 11, Jesus really proves that death didn’t scare him.  Lazarus, the brother of Mary and Martha, had died.  When Jesus arrived, Martha warned him, “don’t go in the tomb.  It’s been four days. The smell will be awful.”

Well, Jesus walked boldly to the tomb and commanded that the stone be rolled away.  Jesus isn't afraid of that smell.  He inhales it deeply and then breathes it back out.  He's not afraid of it because He knows He’ll defeat it.  He reaches into the smell of death and transforms it into the fragrance of life.  Jesus brought Lazarus back to life. 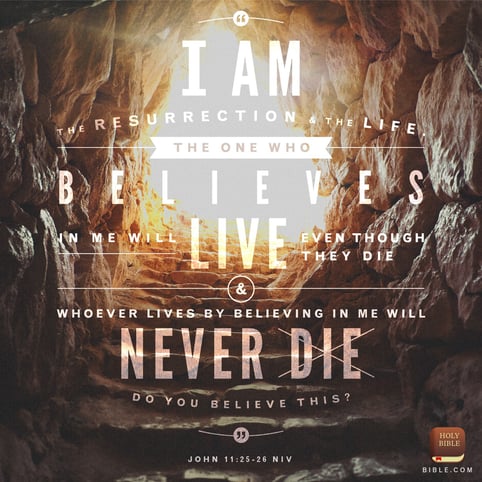 Scripture says that the wages of sin is death so Christ died as He took the sin of the whole world upon His shoulders.  Jesus lay dead in the tomb for several days.  Death has a way of looking like it’s going to win – right up until it doesn’t.  You know good and well on that first Saturday between Good Friday and Easter Sunday that the Devil had to have been feeling pretty good about himself.  He probably thought, “it’s been 24 hours and he’s still dead. I won!”

I am a competitive person so maybe that’s why it’s easy for me to conceptualize Jesus defeating death like this.  I like sports. I  enjoyed playing them in my youth and I enjoy watching them now both live and on TV. Part of the real drama of sports is you often don’t know who is going to win.  In pro and major college sports, there is so much parity that anyone can beat anyone on any given night.  Defeat is always a very real possibility.  And with hundreds of examples of huge underdogs defeating a heavy favorite, one never knows who’s going to win.

The fight between Jesus and death, though, is not nearly that dramatic.  As Jesus and Satan battle it out in a spiritual war, we rest assured that in the end Jesus will triumph because Jesus has defeated death once and for all.  I’ve said it before and I’ll say it again: I’ve read the back of the book and we win!

On that first Easter Sunday, Jesus won.  Death was conquered when Jesus walked out of His grave, ALIVE.  Jesus proved then and there that He was victorious over death. The grave could not hold him.  Acts 2:24 says it this way:  “But God raised Him from the dead, freeing him from the agony of death, because it was impossible for death to keep its hold on Him.” No one should be surprised.  Jesus had been saying this all along.  In Mark 8:31, we read, “He (Jesus) then began to teach them that the son of Man must suffer many things and be rejected by the elders, the chief priests, and the teachers of the law, and that He must be killed and after three days rise again.”

I love how Christian author and pastor Max Lucado writes it:

“...after three days in a dark hole he stepped into the Easter sunrise with a smile and a swagger and a question for lowly Lucifer—"Is that your best punch?"

That was cool, incredibly cool.

But you want to know the coolest thing about the One who gave up the crown of heaven for a crown of thorns?

His victory is our victory.  1 Corinthians 15: 57 speaks clearly to that.  “Thanks be to God! He GIVES US the victory through our Lord Jesus Christ!”   Jesus did it for us.  There is nothing else we need to do.  He gives us the victory.

Two verses earlier in 1 Corinthians 15:55, the Apostle Paul shouts defiantly…“Where, O death is your victory?”  Of course, there’s no answer so he asks again…“Where, O death is your sting?”  Again, no reply. Why is there no reply?  Because God raised Jesus from the dead, proving once and for all that He is ultimately and officially in control of what’s going on with life and death.  Death may take our body once, but we will be resurrected and live eternally.

God made that clear throughout Scripture when He said things like, “I am the resurrection and the life. He who believes in me will live, even though he dies; and whoever lives and believes in me will never die,”  John 11:25-26 or in Isaiah 25:8, “He will swallow up death forever.”

There you have it.  Death is swallowed up forever because of Christ’s victory that He won for us.  May the joy of Easter be in your hearts and minds today and every day.  Happy Easter! 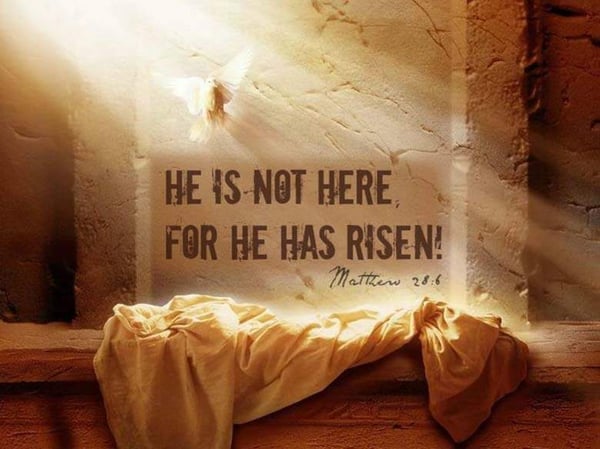