In doing a little research, it appears that calling the day of Christ’s Crucifixion ‘Good’ Friday is a designation that is peculiar to the English language.  In Germany, it is Mourning Friday.  In Norway it is called Long Friday.  Why do we call it Good Friday? 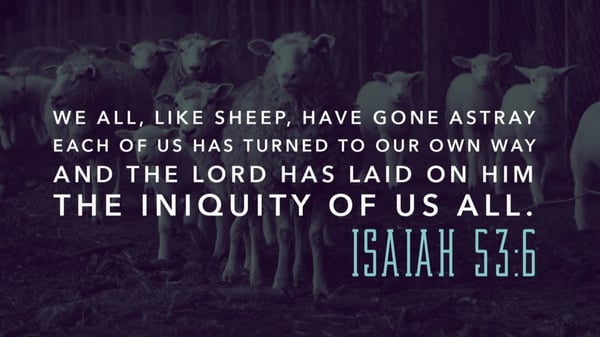 Paul, inspired by the Holy Spirit, says it this way in 2 Corinthians 5:21, “God made him who had no sin to be sin for us.”  This is what happened on that first Good Friday. We were given grace. There is no better word to describe grace than amazing!  No wonder it’s called Good Friday.  John 15:13 explains it this way, “Greater love has no one than this, that a man lay down his life for his friends.”  Nails didn’t hold Jesus on that cross.  Love did.

God died a horrific death so that we might live.  It’s easy to point the finger at Judas, the Pharisees, Pilate, the crowd, or the soldiers and blame them for Christ’s death.  It’s easy to get mad at them and say in 2000 year retrospect, “Why did you kill Jesus?!”  But then I’m reminded of a time I was called to the hallway to see a mural that a student working on at Lutheran High School North in Macomb, Michigan where I served as principal for 12 years.  The mural is still there today.  It’s a mural of the soldiers putting Jesus on the cross and lifting the cross into place.  I said to the artist that afternoon, “It looks like after you get some faces painted on those soldiers, you’ll be done with the mural.”  The student artist looked up at me with her 17 year old theological genius and said, “If we paint faces on them, you won’t recognize them as you and me, and it was our sins that put him on that cross.”  Wow, out of the mouths of babes…

She’s so right.  After all, was it not for our sins that He died?  If we believe, and we most certainly do, that Christ died for our sins, then it was indeed our sins put him there.  Out of His great love for us, God let His Son bear the penalty of all of our sins. So there is nothing left for us to do. 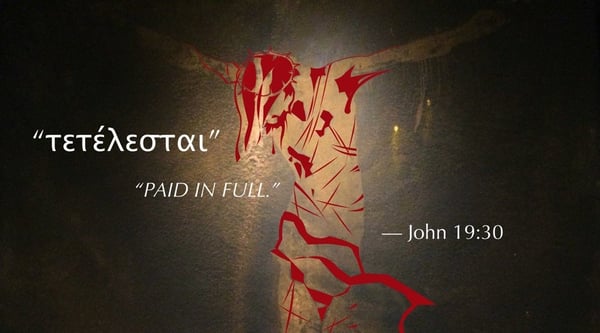 John 19:30 says, “When he had received the drink, Jesus said, "It is finished."  With that, he bowed his head and gave up his spirit.”  Those three words, “It is finished” come from one Greek word: tetelestai.  It was used by various people in everyday life in those days.   The word means, “It is finished, it stands finished, and it always will be finished.”  A servant would use it when reporting to his or her master, “I have completed the work assigned to me” (see John 17:4).  Tetelestai: I am finished with that task.  Tetelestai was also a common phrase used to describe a victor’s triumph.  It was a word used by a runner as he was the first to cross the finish line.  It was a cry of victory: Tetelestai.  I am finished; the victory has been secured.  But the best use of the word tetelestai is this:  archaeological digs found hundreds of Greek papyri, which were business receipts for taxes.  On the receipts was the same Greek word, tetelestai, that Jesus used on the cross: It’s meaning was simple: paid in full.  It was stamped on the tax papers that had been paid in full. 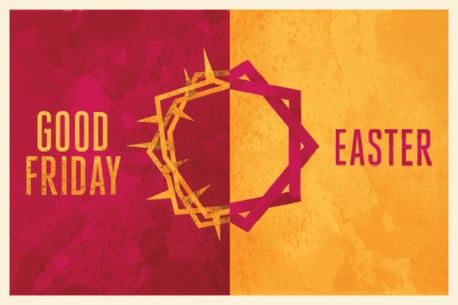 I know it is Good Friday.  I know we aren't supposed to celebrate the Resurrection until Sunday.  I can’t help but look ahead.  It’s a little like being a kid and wanting to open Christmas presents before Christmas.  I can’t help but peek ahead a few days!  We know the wonderful end to this wonderful story.  We live on this side of Easter.

What’s so good about Good Friday?  I’ll tell you what’s so good. God, who created the world and everything in it, loved you and me so much that He sent his one and only Son that whoever believes in Him will not perish but have eternal life.  Now that’s great news on this Friday. Maybe Good Friday isn’t appropriate. Maybe today should be called Great Friday.

Dr. Steven Buuck serves as the CEO of Faith Lutheran Middle School & High School in Las Vegas, NV. The videos can be found at https://www.youtube.com/watch?v=sJ7XcwWb