Life is Beautiful...Stressful but Beautiful

Students today can seem more involved, well-rounded, and engaged then generations before.  The result: BUSY teenagers.  What can we do to support and mentor them as life gets stressful?

Nick is a varsity football player, varsity wrestler, in the marching band and jazz band, is ranked 1st in his class and enrolled in 5 AP classes in his junior year of high school.  On some days in the Fall, Nick starts with jazz band at 6:30am before his normal school day. Then football practice runs from 3:00pm until 6:00pm when he gets a break to shower, change and eat dinner before marching band practice begins at 6:45pm and runs until 9:00pm.  Things will calm down a bit during the week in the Winter and Spring, but he will spend every weekend out of town at regional wrestling tournaments, and still needs to somehow find time to prepare for and take the SAT and ACT and put some serious thought into what he is looking for in a university.

Lia, a senior, is the student body president, in the honor choir, and has starred in every major theatre production since her freshman year.  Honor choir for Lia is an early morning commitment 4 days per week at 6:30am.  After school each day for her depends on the time of year but most often consists of theatre rehearsals until 6:00pm followed by private acting, voice and dance lessons in the evenings until 9:00pm.  During production weeks, she can count on being at school until 11:00pm most nights.  In addition, as student body president, she is responsible for overseeing the various certifications and award statuses that her school seeks to achieve as well as planning and running school-wide service events, dances and assemblies.  She works on her college applications a little here and there, but still would like to retake the SAT one more time.  Applying to be a musical theatre major also involves a number of auditions both live and recorded that she has yet to begin preparing for.

As unique as these students may sound, Nick and Lia are not alone.  There are a minimum of 15-20 others in each graduation year with similar daily schedules.  The coaches, teachers and counselors in their lives joke with them, as they do with each other, about when they find time to sleep.  The answer to that question is invariably, “I don’t,” followed by distracted laughter that quickly fades as their brains go back to focusing on whatever is next on their plates.

In nearly every case, the parents are not pushing their children to this.  On the contrary, they wish their children could learn to relax a bit more, go to bed earlier, and hang out with their friends more.  Parents, if you can relate to these examples, if you worry that your overly busy teenager will eventually become overwhelmed by stress, here are a few tips that might help.

1.  Engage the school, your child’s counselor, and the person in charge of the programs in which your child participates with concerns about your child’s schedule and stress level.  The people at the school will be plugged into what is and isn't normal for their students and can suggest specific schedule changes, methods of prioritizing or stress reduction techniques.  This also helps when you believe your child might not listen to you even if you know how to help.  Having a coach, counselor or teacher making recommendations can do wonders, even if they are the same recommendations that have been ignored since you gave them weeks ago.

2.  If you aren’t forcing it, your child does what they do because they want to and views the accompanying stress as worth it.  Nick and Lia for instance, wouldn’t give up anything on their plates unless they absolutely had to.  Teenagers often respond to negotiations, however, if you notice stress levels are too high, offering an enticing alternative to the stressor can be very effective.

Lia had been contemplating auditioning for a community theatre production.  Worried that one more thing on her plate this Fall is not a good idea, Lia’s mom sprung for Life is Beautiful passes for Lia and her friend, which just happened to take up the entire weekend, not allowing time for any auditions.  Not only does Lia get an entire weekend de-stressing with music and fun, but she is now not committed to weeks of rehearsals on top of everything else she has going on. 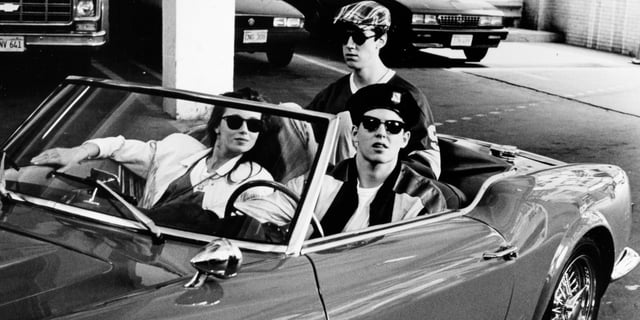 3.  Encourage your child to take days off...not days off from school of course!  Instead, plan for time to do nothing or just enjoy life in general.  The important part is that the activities are not anything that he has to do.  In the immortal words of John Hughes’s character Ferris Bueller (whose specific type of day off we are not trying to emulate, remember) “Life moves pretty fast.   If you don’t stop and look around once in awhile, you could miss it.”

As a varsity football player, Nick could take Fridays and Saturdays off during the football season.  While he would normally head home and start doing hours of homework immediately after football practice on a Thursday, on Friday after the game he can hang out with friends or go to bed early. Saturday could be a family day out or a family day in or something on his own or with friends.

4.  Scaling back does not mean your child has to quit.  You want your child to be less stressed, but you also want them to be happy.  Making them quit something that makes them happy is not going to reduce their stress.

Lia does not need to take private voice, dance and acting lessons but she loves them.  Even though they take up time and force her to start her homework later on some nights, she, in fact, views them as a stress relief.  During certain busy times of the year, however, they can go from stress-relieving to stress-causing.  She does not and should not schedule her evening private lessons during times of the year that are more busy for her at school, like homecoming week, prom week, finals weeks, production weeks, etc.

5.  Even though your child has the schedule of an adult, remember that they are still your child and you are still their parent.  Anything that you see sending your child down an unhealthy path is something that should be talked about and possibly removed whether they like it or not.

During Nick’s sophomore year, he had a bit of a Snapchat problem.  At first, his parents thought his high stress and lack of sleep was due to being involved in too many activities combined with too many advanced classes with too many hours of homework, so they followed the advice of number 1 on this list.  In the course of sorting things out and making a plan, Nick’s counselor asked him in front of his parents if he was on social media.  He said he was on Snapchat, of which his parents were well aware.  What they weren’t aware of was the answer to the counselor’s next question, “How many Snapstreaks do you have going?”  Thirty-five was Nick’s answer, and it didn’t take long to figure out what was monopolizing so much of his time that his normal schedule was overwhelming him. Needless to say, Nick no longer has Snapchat, and it was not a choice he made on his own.

If your child is like this, there is a good chance so are you.  Just like everything else that you have taught them in their lives, they need your help to learn how to manage everything they have gotten themselves into. They won’t often ask for it, but give them the advice anyway. They will often fight against it, but take away what needs to be taken away. They won’t often admit it, but teenagers need their parents!